When I arrived at Shin-daibutsuji Temple on June 5, I paid 300 YEN for a guide. First, the guide showed me Fudo-myoo. Next, I watched Big Buddha. The Big Buddha statue was originally created in the Kamakura period. But, only the face remains, that is, the body was re-created in the Edo period. When I watched the statue, I think the Big Buddha in Shin-daibutsuji Temple is more handsome than the one in Todaiji Temple of Nara. 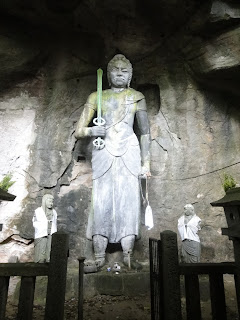